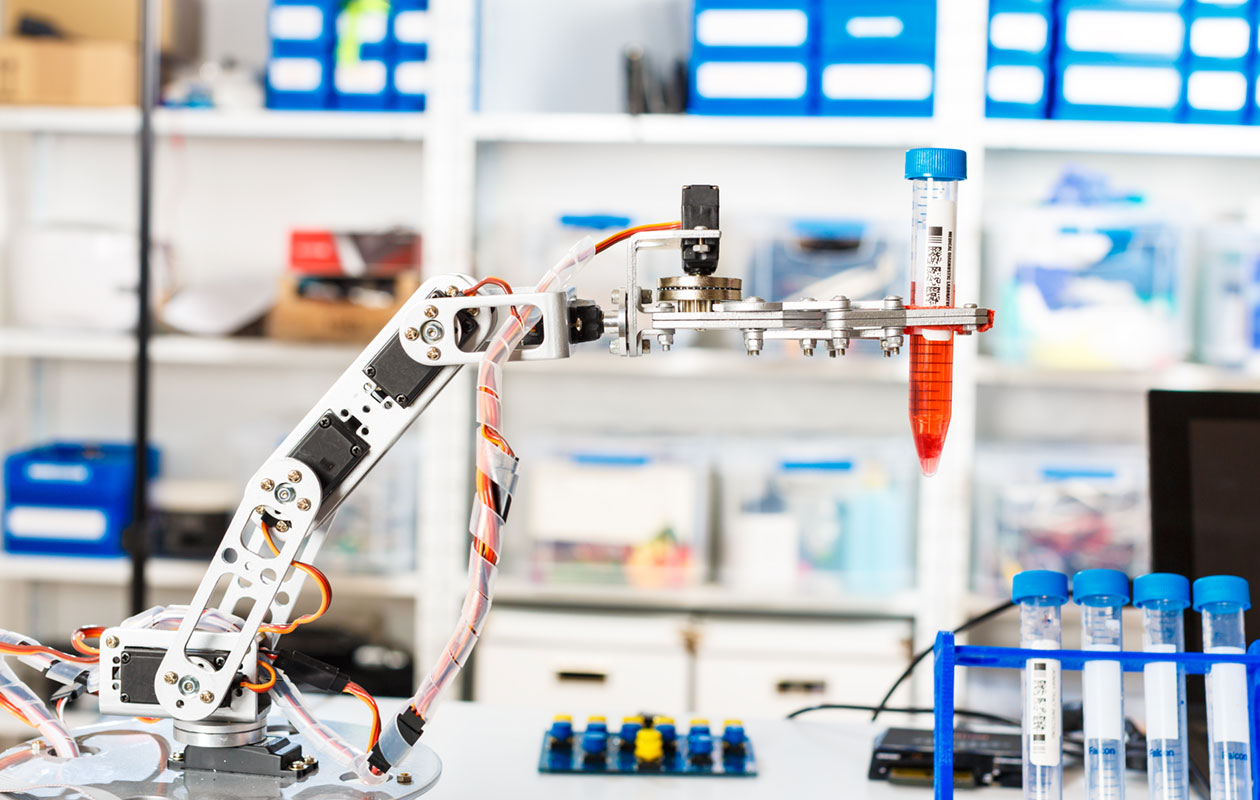 With facilities across the world, COBE is a global leader in medical equipment manufacturing. Their BCT division in Lakewood, Colorado manufactures disposable kits for their line of Spectra™ Apheresis equipment, and COBE BCT holds a significant share of the Apheresis market. Apheresis is a process by which the blood is separated into their respective components, such as red and white cells and platelets. The most common application of Apheresis is to gather platelets to infuse into chemotherapy patients’ blood. COBE BCT’s Apheresis kits consist of various parts such as tubes and filters combined into subassemblies, which are then assembled on color-coded pallets and sealed into a package that is used for one donor on a Spectra™ machine before being discarded.

COBE BCT currently manufactures several types of kits, each with minor differences, so their line must be able to adapt to the different requirements for each type of kit. Safety and sterilization are also top priorities for these products, so they maintain a Clean Room 100K environment to insure that the kits are not contaminated.

Previously, COBE BCT had been using a production process they called the “Batch Process” in which subassemblies were built on outlying tables, then moved to central tables for final assembly and packaging. They saw that there was obvious room for improvement and that some sort of automation to help production flow was in order. COBE BCT began testing and experimenting with their existing production system to understand where efficiencies were lacking and to uncover improvement opportunities.

The first production flow experiment was on an oval line. The line consisted of roller (skatewheel) conveyors where subassemblies were added to a pallet at successive stations, then manually pushed down the roller to the next station. The system had a relatively slow production rate and ergonomic problems. In this system, operators had to stand and bend constantly while placing the kits on and off of the conveyors. In addition, the lack of stops made it very easy for a pallet to run into a waiting pallet at the next station. COBE BCT has always prided itself on maintaining a safe, pleasant environment for its employees, and it was obvious that these ergonomic factors would have to be solved in the next generation of the system. Despite these problems, they could see that this sort of flow environment was what they needed to improve productivity.

Upgrading to a Custom Conveyor System

Next, they needed a conveyor manufacturer to help design a system that was clean, efficient and safe. Bob Fiore, in the position of COBE BCT’s Manufacturing Engineering Manager, came across a promotional video of Span Tech’s Designer System conveyors. “I was immediately impressed.” said Bob. “The continuous curving capability of the conveyors was like no other system I had seen.” Since space is a major factor in a clean room environment, the Designer System’s ability to curve tightly was a real plus. He was also impressed by the modularity and simplicity of the system, and the built-in safety features such as the elimination of the catenary and full-capture of the chain to the frame.

Span Tech had no previous experience with this type of pallet handling systems, but recognized that Designer System conveyors would be ideal. “It was a real challenge for us,” said Bud Layne, Span Tech president and founder. “We were intrigued, especially in how we could minimize impact on the line workers. Human-machine interface has always been an interest of mine.” Bob visited Span Tech in Glasgow and was pleased with the production methods and capability demonstrations he witnessed. From there, Span Tech and COBE BCT worked together to design a prototype for their next generation production line.

The first major design change suggested that the pallets be set up at an acute angle, so operators could reach from the bottom to the top of the pallet in a seated position, giving them a sit/stand option and greatly reducing fatigue. This was achieved by installing a single MonoSpan conveyor underneath the top of the pallet to provide motive power and rollers on the bottom rail for the pallets to glide over. Ergonomic factors were considered carefully before the final tilt angle was decided upon. In addition, power-operated foot rests were installed at operator positions so operators could adjust the foot rests for their individual comfort. Pneumatically-operated stops were placed before and after each operator position to allow for logic control of the line. “It was an elegant solution,” Bob said. “I was concerned about how we would curve the pallets back around to the other side of the line, but Bud was able to come up with an answer.” The design was a separate, tight-curving (3 foot bend radius) conveyor that links the two sides of the line. On these, motive power is derived from a MonoSpan conveyor running along the bottom of the pallet, with a UHMW guide rail supporting the top. Transfer is smooth and effortless to and from the curves.

The prototype was installed within a short period of time in part of an unused building, so it could be evaluated and control logic could be designed. Employees from both the “batch” and “skatewheel” lines took turns trying out the new line. Laurie Harfst, Production Area Coordinator for COBE BCT, had earlier been employed as a line worker and had worked with both the previous lines. “The (Span Tech) conveyor was an immediate improvement,” she said. “It was much more comfortable to work on.” She also noted that it increased both productivity and quality, since it was much easier to inspect the tilted pallets for defects. The new system was able to decrease the cycle time significantly. It was obvious to everyone that they had found the solution they were looking for.

Bob also needed rotating racks for the “Loop & Channel” and “Flow” subassembly areas on each line. “I looked at dedicated systems offered by material handling equipment companies, but they were expensive. By that time, I was familiar enough with the Designer System to have an inspiration: Why not turn a simple MaxiSpan conveyor on its side, extend the rods, and use them to hang the baskets?” It is probably one of the most unique applications of Designer System conveyors, but the conveyors have performed admirably, and at a much lower cost. Each conveyor is controlled by a foot pedal on the inside end. In order to finish out the design, a straight MultiSpan conveyor with roller chain was added where the kit comes off the line before packaging. It allows for accumulation without product damage before the kit is sealed and sent to shipping.

The order for the first line was made early the next year, and installed that summer. Almost immediately, a second line was ordered, and then a third soon after that. In addition, a line was also ordered for a new location in Glouchester, England. All three lines in the Denver plant operate two shifts a day (13 hours), 251 days per year, during which the conveyors run continuously. After installation, a new formulation of UV-resistant chain was supplied to COBE BCT for cosmetic reasons. Since then, chain on the conveyor has accumulated over 13,900 hours of run-time without any replacement. Total parts orders for the first four years were only $22,533, an average of $5,633 per year. Cost for the three systems totaled $389,000, yielding an annual maintenance expense of 1.5% of the total system price. (Much of their parts cost has included upgrading to new SEW Eurodrive™ gear motors.) Preventative maintenance includes regular sprocket replacement and a quarterly chain cleaning. Other than preventative maintenance, line shutdowns are almost unknown. “Total system down time can be measured in hours,” said Bob. “When there has been a problem, Span Tech has been very responsive to our needs.”

COBE BCT is a prime example of the flexibility and openness of the Designer System, as well as the ability of Span Tech to deliver a custom solution in an unusual application. From the beginning, Span Tech’s relationship with COBE BCT has been that of a valued partner rather than simply an equipment supplier. “We stand behind COBE BCT 100 percent,” said Bud. When asked why he is committed to Designer System conveyors, Bob Fiore is quick to point out his reasons. “They are clean, safe, easily maintainable, dependable and cost-effective. When it comes to problems, it’s almost like that old statement in the movies, ‘It’s quiet … too quiet!’ I keep expecting something to happen, but they just keep on running.”