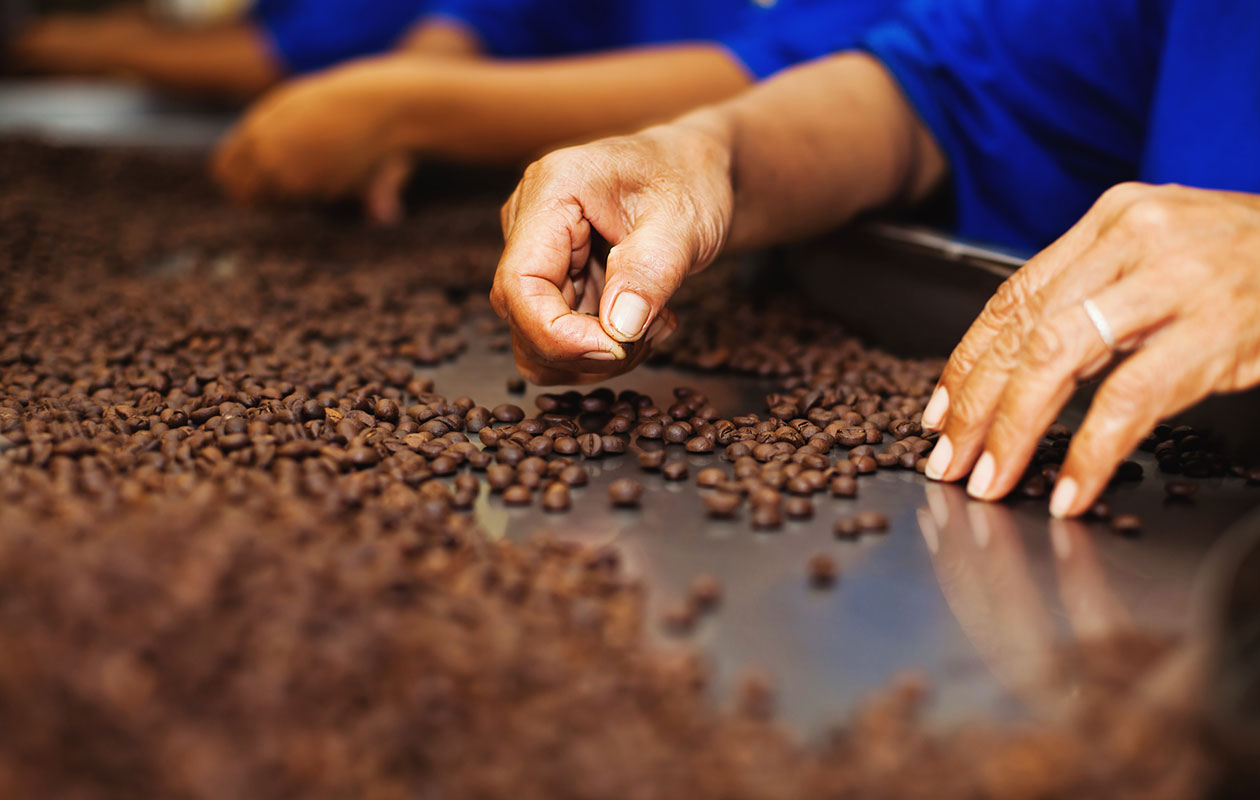 Mr. Coffee’s standard coffee filter comes in cartons of 100, 150 or 200. They also have a line of “Junior” filters to fit their smaller coffee makers. During their regular filter production process, 100 rolls of paper are mounted on a huge rack. The paper is passed to the front of the rack, where tension is maintained and the paper is readied for the converters. The converters are two large steam-driven presses, each stamping out three groups of 100 filters during one pass. Typical running speed for the converters is 60 cycles per minute.

Mr. Coffee had been using traditional plastic chain conveyors — and experiencing significant problems particularly with maintenance. Most notably, chain and sprockets had to be completely replaced every year. Conveyors were failing, in part because of the extreme environment. As filters come out of the converters, they are hot from both the pressure of conversion and the steam. They are also moist. Ambient temperatures around the converters rise above 90°F in summer. The traditional plastic chain on their existing conveyor system did not allow for cooling and tended to bond to moist filters, damaging the product and making it difficult for the cartoner to pick it up.

After examining the application, it was apparent that Designer System conveyors could provide many advantages. Designer System chain, with its open design and built-in tolerance for temperature variance, allows the filters to dry and cool before they reach the cartoner, where the ambient temperature is about 10° cooler.

Span Tech was also able to implement a custom conveyor design to address some unique product flow needs. Mr. Coffee normally has one eight-hour shift on the filter line, with an additional shift added 18 weeks a year to meet holiday demand. This adds up to a total run time of about 2,800 hours per year. Often, filters are backed up all the way from the cartoner to the point of singulation, and must remain there for several minutes while problems with the cartoner are resolved. In these situations, the conveyors continue to run with very low back pressure, virtually eliminating product damage. Likewise, accumulation often occurs with the boxed product between the cartoner and the case packer.

Getting a Grip on Efficiency

Mr. Coffee’s traditional plastic chain had not been able to get enough grip on the somewhat slippery boxes. Another advantage offered by the Span Tech Designer System was the conveyor chain’s ability to firmly grip a product, without causing damage during accumulation. Designer System chain was able to achieve the correct balance between grip and give, allowing for reliable conveyance and trouble-free accumulation.

The people at the Mr. Coffee have a reason to be happy with their production line. During the first six years of production following the initial installation of the Span Tech Designer System conveyors, Mr. Coffee produced over 240 million cartons of coffee filters with an average spare parts cost of $174 per year. Taking into account the initial $198,000 purchase price of the system, Mr. Coffee’s maintenance cost during this period equaled only .09% of the system price per year.

Eventually, Mr. Coffee found a need to increase their production capacity and moved their plant to a larger facility across town. They incorporated their existing conveyors into their new system, and added several new conveyors as well. With capable engineering and maintenance departments, Mr. Coffee was able to make the modifications they needed themselves, with some design help from Span Tech.

When Mr. Coffee’s personnel are asked what they like most about Span Tech conveyors, the unusually smooth and quiet movement of the conveyor system is the near-unanimous answer. The noise of the converters already makes it difficult to hear on the production floor, and the fact that the Span Tech conveyors run so quietly makes a real difference in the quality of the work environment. They also find the conveyors very easy to clean. A contaminant of paper dust and fibers is produced in the converters, and accumulates on all factory surfaces. Most of the time, in order to clean the chain, they simply wedge a couple of filters under the side guides and let the conveyors run. About four times a year, the conveyors are hosed down to remove the extra contaminants.

Reliability and ease of maintenance are also high points with the staff. After six years — that’s approximately 16,800 hours of run time — a large portion of the original chain was still on the conveyors and running well. The system is very dependable, and seldom has to be shut down for maintenance. When shutdown is necessary, the modularity of the system allows for easy replacement of worn parts. Mr. Coffee’s head of maintenance remarked that the system is seldom down for more than ten minutes for repair purposes. Also mentioned as a big plus was the fact that the motors and drives do not have to be removed for chain maintenance. There are no alignment problems as with traditional belt conveyors, and the plant has been able to maintain the conveyors with a minimum of replacement parts.

Working together, Mr. Coffee and Span Tech have ensured that their conveyor systems will continue to perform reliably and economically for many more years to come.